When we talk about reverse engineering and dimensional measurement, we often refer to manufactured parts, engineering tolerances, and other abstract concepts. Although we don't often encounter this particular type of project, this case study provides an excellent example of reverse engineering in action.

Mike M. came to Q-PLUS with an uncommon request and an even more unique story behind it.

In 1979, Mike's grandparents hosted a family gathering. All was going well until the smoke alarm went off! After much searching and a hint of panic, the source of the smoke was discovered: A plastic butter dish had fallen onto the dishwasher’s heating element, melted, and triggered the smoke alarm.

The unlucky cousin who had loaded the dishwasher looked in and asked, "Is it ruined?" One look at the clearly ruined butter dish sparked hilarity and prompted her grandfather to mount it on a plaque and present it to her. The butter dish became a family award that was presented annually to the person who had done the dumbest thing the year before.

Some of the most memorable awards were given to:

For more than 25 years, the not-so-coveted award was passed around the family. Eventually, the original award-winner decided that she wanted this special keepsake permanently back in her possession. What was the rest of the family to do?

Mike decided to explore the option of replicating the cherished (and deformed) butter dish to carry on the family tradition. He went to the R&D department at the medical device company where he works and asked if they could possibly make a copy using the in-house 3-D printer.

The initial response was, "A butter dish? Sure, we can copy that." But after one look at this butter dish in all its melted glory, the R&D team members decided that it was beyond their capabilities. It was too complicated because the shape was so irregular. However, they did recommend a lab that they sometimes used for outsourcing this type of work.

Mike contacted the recommended lab and thought he had found a solution ... until he sent a picture of the butter dish. Foiled again!

Q-PLUS to the Rescue

Still on a mission to continue this unique family tradition, Mike turned to the trusty Internet. He found the Q-PLUS website, filled out the contact form, and got a return phone call in 15 minutes. Unlike the R&D team and the first lab Mike tried, we were not only up for the challenge, but we also were excited about it. What a great story!

Unlike many of our other projects in which clients send in objects for reverse engineering, this was a special case. Mike was concerned that a melted butter dish received in the mail would not get the respect it deserved and could possibly get lost (or tossed) after all these years. We scheduled time on a Saturday for him to bring the award in and have it scanned.

For the scanner, we used a high-end white light scanner: a Steinbichler Comet 5 4M. There are less powerful scanners we could have used for a project like this, but our team got caught up in the excitement and wanted to produce the best possible results. The white light scanner was used because we needed a massive amount of highly accurate data to capture the detail of the melted butter dish. This device was also selected because it provides relatively fast results and budget was a consideration.

This particular project is a perfect example of “as-built” reverse engineering. The goal was to create a replica of the original object, errors and all (and clearly, this butter dish was rife with errors!). On the other hand, if we were reverse engineering for design intent, we would have tried to produce a functional butter dish that matched its pre-melted state.

Butter Dish 2.0 Is Back in Action 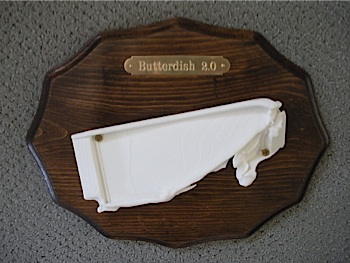 Mike was able to take our digital scan and have a replica made using a 3-D printer. Butter Dish 2.0 lives on, and the family tradition remains uninterrupted.

In addition to achieving the desired goal, Mike was happy to learn more about the scanning and printing process. He thought that it was amazing that an object, especially one so complicated, could be replicated so exactly.

When asked about his experience with Q-PLUS, Mike said:

“Q-PLUS was very responsive. Within 15 minutes, I received a return call. Throughout the process, they were very engaged and had good follow-through every step of the way. I know my request was unusual, but they were very accommodating and flexible with scheduling so I could bring the butter dish to the lab myself.”

Now that the butter dish replication problem is solved, Mike's biggest worry is that he will be the next award-winner!

Click to view scan in Firefox, Safari, and Chrome